Historical production at Weepah occurred from shallow underground mines and a small open pit during two separate time intervals. From 1935 to 1939, Weepah Nevada Mining Co. produced gold from 305,000 metric tonnes grading 5.8g/t. From 1986 to 1987, Sunshine Mining Co. produced at various grades approximately 60,000 oz. of additional gold with accessory silver. Historic production figures are from several published and unpublished company reports; however, a qualified person has not done sufficient work to verify these grades and tonnages, and Valterra cautions that these historic production figures should not be relied upon.

The gold mineralization at Weepah occurs within two broad shear zones. The western shear zone was exploited by the small open pit and adjacent underground workings. The eastern shear zone was exploited by historic workings and was extended by recent drilling. The zones have been traced for several hundred meters along strike and variably down dip. Portions of the shear zones are exposed at surface or in workings and portions have been traced by widely spaced drill holes beneath shallow gravel cover, which is generally less than 10m to 30m thick. Vein textures and geochemistry suggest the mineralization is similar to many other mesothermal vein deposits along the western margin of North America.

The company is planning an initial 2,250m drill program consisting of five fences along the two identified shear zones, with each fence consisting of three (3) drill holes each for a total of 15 holes. Additional sampling is planned to identify other potential shear zones and zoning patterns that have been indicated by multi-element geochemistry from very limited surface sampling. 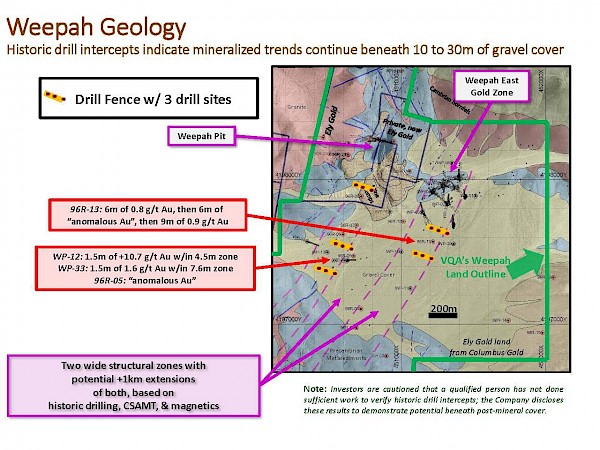 The initial 2017 Phase I mapping, soil sampling and drilling exploration program at Valterra’s Swift-Katie Project in southern British Columbia, is scheduled to commence in early July and is budgeted at approximately C$250,000.  Eight to ten core holes totaling 1300 metres are planned and will focus on the near-surface gold potential of an 2,500 metre long alteration zone that extends through the southern Swift part of the property.

Exploration results to date support the Company’s belief of a widespread gold-enriched, vein system at the Swift target and a large alkali porphyry system at the Katie target.  Further work will be designed to continue to expand the known mineral systems and evaluate several other targets which remain to be tested on the Project.

Valterra is currently funded to complete the proposed exploration work, permits with the BC regulatory agencies are in place and program planning activities are ongoing.

Valterra is pleased to announce the appointment of Joseph A. Kizis, Jr. as a director.  Mr. Kizis is a Registered Geologist and a Certified Professional Geologist with a B.S. in Geology from Kent State University and an M.S. in Geology from the University of Colorado. He has 40 years of experience in exploration for gold, silver, copper, molybdenum, lead, zinc, and uranium in the U.S., Canada and abroad. He is the President and a director of Bravada Gold Corporation and previously of Homestake Resource Corporation as well as Fortune River Resource Corp. (which amalgamated with Bravada Gold Corporation in 2011). Mr. Kizis has held previous executive positions and directorships with Fairmile GoldTech, Sierra Geothermal, the Geological Society of Nevada, and the GSN Foundation.

President and Chairman Lawrence Page Q. C. commented, “Joe has been involved with the Manex Group of Companies for the past 15 years, working with an exceptional group of exploration geology consultants at our Reno Office. When Valterra received the Weepah submittal, we asked Joe and his group to evaluate the newly consolidated property as a potential acquisition. Based on their work, the Board invited Joe to join as a Director and to oversee exploration and development of Weepah using his experienced team in Reno.”

Valterra is a Manex Resource Group Company.  The group provides expertise in exploration, administration, and corporate development services for Valterra’s mineral properties located in British Columbia and Nevada.  Valterra is focused on early stage properties with the potential to host large deposits in regions with excellent infrastructure.

Joseph Anthony Kizis, Jr. (AIPG CPG-11513, Wyoming PG-2576) is the Qualified Person responsible for reviewing and preparing the technical data for the Weepah property presented in this release and has approved its disclosure. Robert Macdonald, MSc. P.Geo, is a Qualified Person as defined by National Instrument 43-101 and responsible for the supervision of the exploration on the Swift Katie Project and for the preparation of the technical information for the project in this disclosure.

On behalf of the Board of Directors,

For further information, please visit Valterra’s website at valterraresource.com or contact Valterra at 604.641.2759 or by email at moc.dtlxnm@ri.

This news release may contain forward-looking statements including but not limited to comments regarding the timing and content of upcoming work programs, geological interpretations, receipt of property titles, potential mineral recovery processes, etc. Forward-looking statements address future events and conditions and therefore involve inherent risks and uncertainties. Actual results may differ materially from those currently anticipated in such statements. These statements are based on a number of assumptions, including, but not limited to, assumptions regarding general economic conditions, interest rates, commodity markets, regulatory and governmental approvals for Valterra Resource Corporation’s projects, and the availability of financing for Valterra Resource Corporation’s development projects on reasonable terms. Factors that could cause actual results to differ materially from those in forward looking statements include market prices, exploitation and exploration successes, the timing and receipt of government and regulatory approvals, and continued availability of capital and financing and general economic, market or business conditions. Valterra Resource Corporation does not assume any obligation to update or revise its forward-looking statements, whether as a result of new information, future events or otherwise, except to the extent required by applicable law.

This News Release may contain forward-looking statements including but not limited to comments regarding the timing and content of upcoming work programs, geological interpretations, receipt of property titles, potential mineral recovery processes, etc. Forward-looking statements address future events and conditions and therefore involve inherent risks and uncertainties. Actual results may differ materially from those currently anticipated in such statements. Valterra Resource Corporation relies upon litigation protection for forward looking statements.